Our story begins on October 16, 2004. I had suspected for a week or so that I was expecting our first child. I had been sick all day—not morning sickness or nausea, just a terrible headache and cold. Mike picked up a pregnancy test from the grocery store and brought it home to me. I had a difficult time getting very excited about the positive test results feeling as lousy as I did, but Mike gave me a kiss as we were now entering the official journey of parenting.

Over the next few weeks, I had a pretty normal first trimester experience. I was occasionally sick and nauseated. I was very fortunate that my obstetrician performed ultrasounds at all of our appointments. At 7 weeks we saw her heart beat! It was amazing. At our next appointment, we received pictures showing her tiny limbs. At 17 weeks, our doctor told us that he suspected we were expecting a little girl. Mike and I were so excited to welcome a daughter into our family! 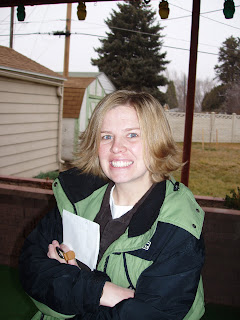 On January 24th (19½ weeks) we visited a Maternal Fetal Medicine doctor for the official ultrasound. (The picture is the "on the way to the ultrasound" picture.) We were told that at this appointment we could confirm our baby’s sex and that she would be sized. I didn’t realize how thorough this routine ultrasound would be. We spent the first 30 minutes, at least, with an ultrasound technician who pointed out our baby’s organs and other body parts. She confirmed that we were, in fact, having a little girl! The tech left to give the measurements and pictures to the doctor who we were told would come in and look at a few more things. When the doctor came in, he introduced himself and immediately asked how sure I was about the baby’s due date. I told him that I was sure about it and he commented that he was concerned that she was 2 weeks behind in development according to the measurements the technician had taken. He sat down and continued to scan me. He and the tech talked in hushed tones in medical vernacular that my husband and I couldn’t quite decipher. The doctor, however, was wonderful to reassure me that I would know everything he had seen prior to leaving his office. When he finished, he told Mike and I about Trisomy 18. He told us that, in addition to the delay in development, our baby had disproportionate heart ventricles, irregular blood flow through the umbilical cord and a large cyst on the brain. He told us that any of these things on their own would not be a terrible cause for concern, but that put together they indicated a possibility for Trisomy 18. He explained that Trisomy 18 is “incompatible with life” and that our child, if diagnosed with Trisomy 18, would not likely live past the 1st week of life. The doctor recommended that we have an amniocentesis performed. Although there was a slight risk of miscarriage associated with the amnio, it would confirm our daughter’s condition. He also explained that if she was diagnosed with Trisomy 18, we had the option to terminate the pregnancy. Due to our religious background, I did not consider this an option.

The doctor gave Mike and I some time alone (with lots of tissues) to talk with each other before we continued talking to him. We cried a lot! Never had we expected this to happen. We were just excited to have a baby and now we had to deal with the possibility of losing a precious child. We knelt down together and prayed. We decided together to go ahead with the amniocentesis. We were welcomed into our doctor’s personal office and we told him that we’d like to do the amnio but needed a couple days to prepare emotionally. We also wanted to talk to our regular obstetrician.

During the next several days, we worried and studied and learned a lot about Trisomy 18. The following web sites, as well as others, were helpful to Mike and me.

On January 27, we chose a name for our daughter. It was very important to me that we develop a relationship with her prior to her birth. I knew that we needed to be able to call her by a name. We chose the name Hope Elisabeth.

We set up an appointment to do the amniocentesis for the following week (January 31). It was a quick process and not too painful. We were told that we’d receive the results of the testing within 10 days.

We were very comforted to find out that the Maternal Fetal Medicine doctor was of the same religious background as us. We are members of The Church of Jesus Christ of Latter-day Saints (commonly referred to as Mormons or the LDS church). The doctor was kind enough to talk to us in his office again. We talked not only about the medical implications of Trisomy 18, but also about the promise that even if our daughter’s earthly life was cut short, her life beyond the grave would continue and that our family could be reunited eternally. This was—and is—very comforting. Nothing short of the gospel of Jesus Christ could get me through this trial. I testify that He lives and that only through Him can our families be together forever.

On February 9 at 6:55 PM, we received the phone call we had dreaded! Our obstetrician had been asked by the Maternal Fetal Medicine doctor to call us and let us know that the genetic testing confirmed that our little Hope Elisabeth did, in fact, have Trisomy 18. It was a very surreal experience. We were a bit numb to the news. During the next 2 hours, we received random phone calls and visits from neighbors and church friends who had no idea what had just happened (although they did know we were awaiting the results). Mike and I felt that this was God’s way of telling us through our friends that He was aware of our situation. We called my family and Mike’s family later that evening and officially began the long preparation for Hope’s birth and even her death.
Posted by The Wessman Family 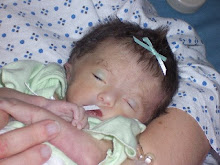